Where it all began

Paddy McCormack was born into a large family in 1895 four and a half miles up the road in Coolcarrigan. As a young man He joined the Irish Army and served his time in the transport division in Wexford. After the War of Independence and Civil War he left the army and set up a bicycle repair shop in Robertstown. During this time he helped set up Robertstown GFC.

He married Martha Kelly from Ballynafagh in 1930. In 1936 local builders Devine Brothers built a house in Prosperous for Paddy’s family on land he acquired from Dick Harris. They had three children Maura, Sean and Rosaleen. Paddy set up a bicycle and car repair shop down the village in a shed beside Daly’s house.

He decided to build this own garage beside his house in 1943. Again he got Devine Brothers to build it, they finished it in 1945 after delays in getting materials because of World War 2. In 1949 he started to sell petrol and got a 500 gallon tank and pump installed. The petrol brand was Mex and it was supplied by McMullen Brothers in Dublin. It was the start of a relationship that would last for the next fifty eight years. At that time there was no electricity in Prosperous and the pump was manually operated. Petrol in Prosperous was 1p dearer to buy than in Clane. This was because the oil companies charged 1p extra to transport fuel more than twenty miles outside Dublin. Prior to this petrol was purchased in two gallon cans. 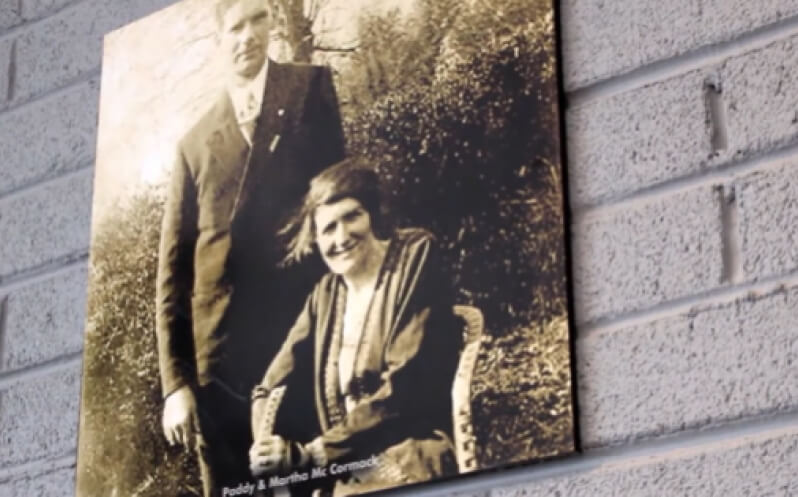 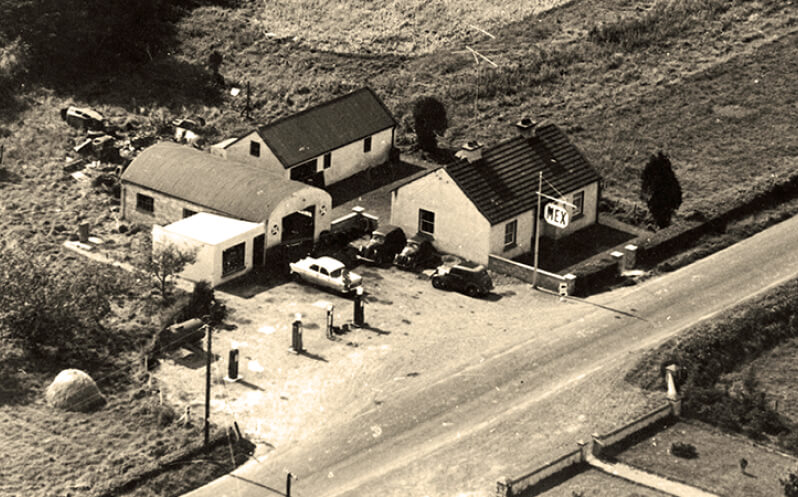 He decided to build this own garage beside his house in 1943. Again he got Devine Brothers to build it, they finished it in 1945 after delays in getting materials because of World War 2. In 1949 he started to sell petrol and got a 500 gallon tank and pump installed. The petrol brand was Mex and it was supplied by McMullen Brothers in Dublin. It was the start of a relationship that would last for the next fifty eight years. At that time there was no electricity in Prosperous and the pump was manually operated. Petrol in Prosperous was 1p dearer to buy than in Clane. This was because the oil companies charged 1p extra to transport fuel more than twenty miles outside Dublin. Prior to this petrol was purchased in two gallon cans.

In 1950 electricity came to Prosperous and new pumps with electric motors were fitted to dispense petrol. All cars and most lorries in the area ran on petrol. Diesel was not sold at the pumps until later on into the 1960s. Paddy was kept busy in the garage repairing cars, lorries and tractors from the locality. Paddy also ran the local hackney service and carried a lot of the Kildare team of the time to GAA matches around the country.

In 1952 Paddy’s son Sean went to Woods Garage in Clane to serve his time as a motor mechanic. Woods was the main Volkswagen agent for the county of Kildare. At this stage the VW Beatle was their best seller and they sold them all over Leinster. Sean spent ten years in Clane and returned in 1962 after working on a variety of makes and models of cars, lorries and tractors in Woods. Sean made a lot of friends in the Clane area at the time and won a minor league with Clane. He played with the local GAA team Caragh and also played with Kildare. He captained another local team Raheens to victory in the 1964 Kildare senior championship and also won many leagues and seven a side tournaments.

Prosperous was a busy route for all the lorries going to and from Dublin delivering coal, briquettes and turf. Bord na Mona was thriving and Peter Norton of Frances Street Dublin (one of Dublin’s largest fuel merchants) soon became Sean’s biggest customer. There were a lot of other fuel merchants locally all selling fuel into Dublin and surrounding areas. Local brothers Anthony Dunne and Sean Dunne (RIP) worked for Sean and maintained a lot of these lorries, as well as cars for local people.

Diesel started to become popular in lorries towards the end of the sixties. With this came expansion to the garage and Sean opened up the area which is now the service station forecourt. This was an orchard up until then. He built a large extension to the garage to facilitate larger vehicles and his expanding business. He also put in a new diesel pump in this area to facilitate lorries and busses.

Sean married Rita Murphy in 1972 and they moved into a house across the road from the garage. They went on to have six children all of which worked in the garage at one stage or another. Paddy Mc Cormack passed away in January 1977 after a short illness. The late seventies brought more expansion with new tanks and pumps installed and a canopy erected. McMullen Brothers were still the fuel supplier but had changed Mex to Maxol. Sean and Rita won several retail awards for their busy service station in the eighties. Martha Mc Cormack passed away in 1985. The late eighties saw further expansion opening a service station shop. This period also saw a decline in the number of fuel merchant lorries on the road due to the introduction of natural gas and smokeless coal to Dublin. This resulted in less lorries requiring maintenance in the garage so new business had to be generated. 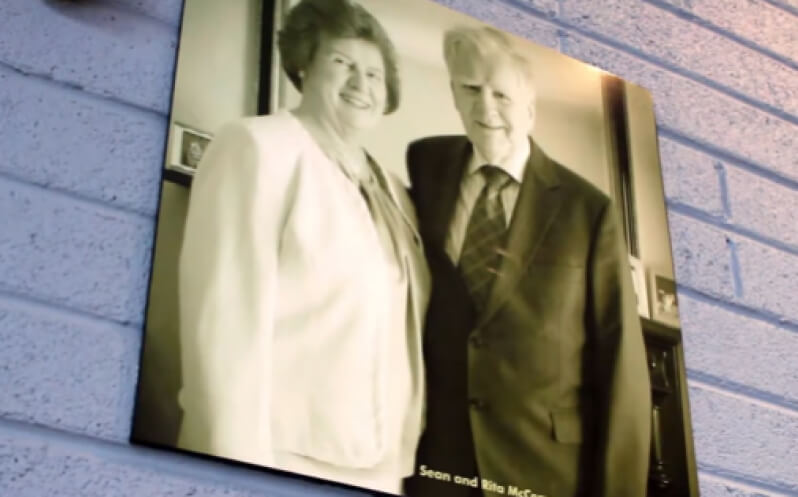 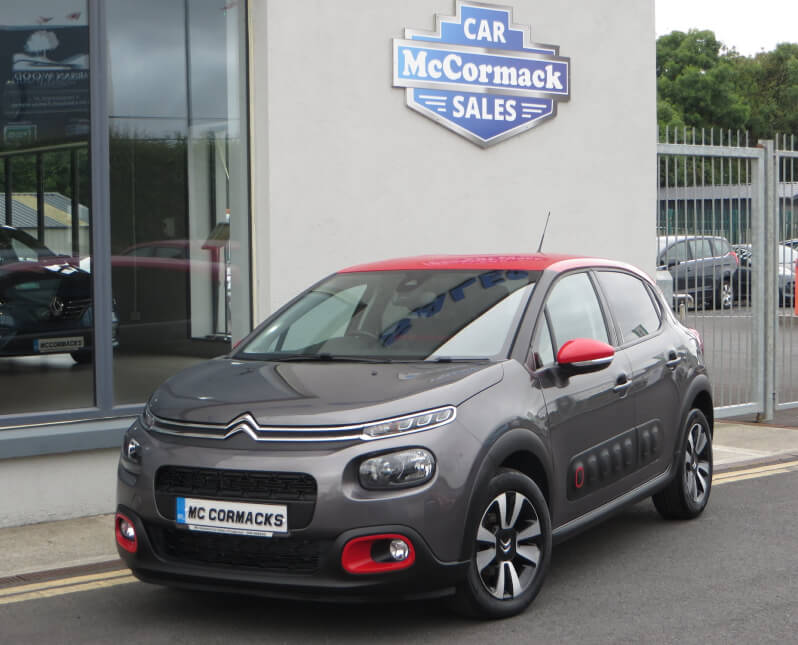 During this period Sean’s eldest son Pat studied Transport Engineering and Motor Industry Management in DIT Bolton Street. He subsequently worked for four years selling cars in two dealerships in Dublin. In 1998 Pat started selling used imported Japanese cars and jeeps in the garage. The workshop was servicing larger numbers of cars and jeeps. Sean concentrated his efforts more on the petrol station. In 2000 Pat set up McCormack Motor Factors specialising in selling motor parts and lubricants to the trade and public. In 2003 his brother Sean returned from Australia to run the Motor Factors. The Japanese imported car trade declined due to the currency difficulties and Pat focused his efforts on selling quality used Irish and UK cars.

In 2007 Sean retired from the business and there ended the fifty eight year relationship with McMullen Brothers. Brian King of Naas Oil took over the running of the service station under the Naas Oil brand. At this stage the petrol station, motor factors, workshop and car sales were thriving but tough testing times lay ahead as the Celtic Tiger ground to a halt and recession kicked in.

The following years were tough in the motor trade. New car sales were at an all-time low and this lead to a decline in quality used cars. Finance was hard to get and people had less income to spend on cars. People did however have to maintain and repair their cars to pass the national car test and get them to and from work if they were lucky enough to have a job. In 2010 Pat married Imelda O’Rafferty and they have two sons James and Eoin.

In 2014 we undertook a major reinvestment in the business. Brian Connolly and associates of Clane designed the new look Garage. We knocked the old garage and in its place built a bigger more modern building housing a shop, motor factors, car sales showroom and associated offices. We put down new modern fuel tanks, new piping to the pumps, interceptor tanks and all the other requirements for the modern service station. We resurfaced the forecourt and parking areas. We refurbished the workshop and made a spacious area to present our used car stock. Local builders Liam and Paul Johnson were the contractors and we used as many local tradesmen on the project as we could.

What you see today is a modern spacious building and petrol station built to suit our customers’ needs in today’s world but that was also the case when Paddy Mc Cormack built his garage back in 1945!

With Hire Purchase you pay for the car in a series of monthly payments. At the end of the term, after all payments and the option to purchase fee is made you take full ownership of the vehicle.

Pay for a vehicle in full via our simple and secure checkout using your credit or debit card. You will have a chance to value your current vehicle should you have one, and choose how to receive your new vehicle.